As volunteers with Freelancers Make Theatre Work, we do our best to try to keep up with the circumstances of the industry as it changes.

We know things can change quickly.
We know how exhausting trying to keep informed can be.
And, we also know that, having worked hard over the past two years to keep the freelance voice in the conversation, sometimes information is shared readily with us in the hope it reaches the freelance workforce.

Therefore, kicking off in January 2022 we aim to create a regular update on the state of the industry.  We hope this makes finding information easier for freelancers. More so, we hope that it may strengthen the case for freelancers trying to enact change of any scale in their workplace.

This is our first attempt at summarising what continues to be a wide ranging and complex beast!  If you have any information you think we should be sharing or if there is anything else you would like us to find out about please email hello@freelancersmaketheatrework.com

We can’t promise to be experts.

We can promise to do our best and improve as we learn!

Scroll down to read… 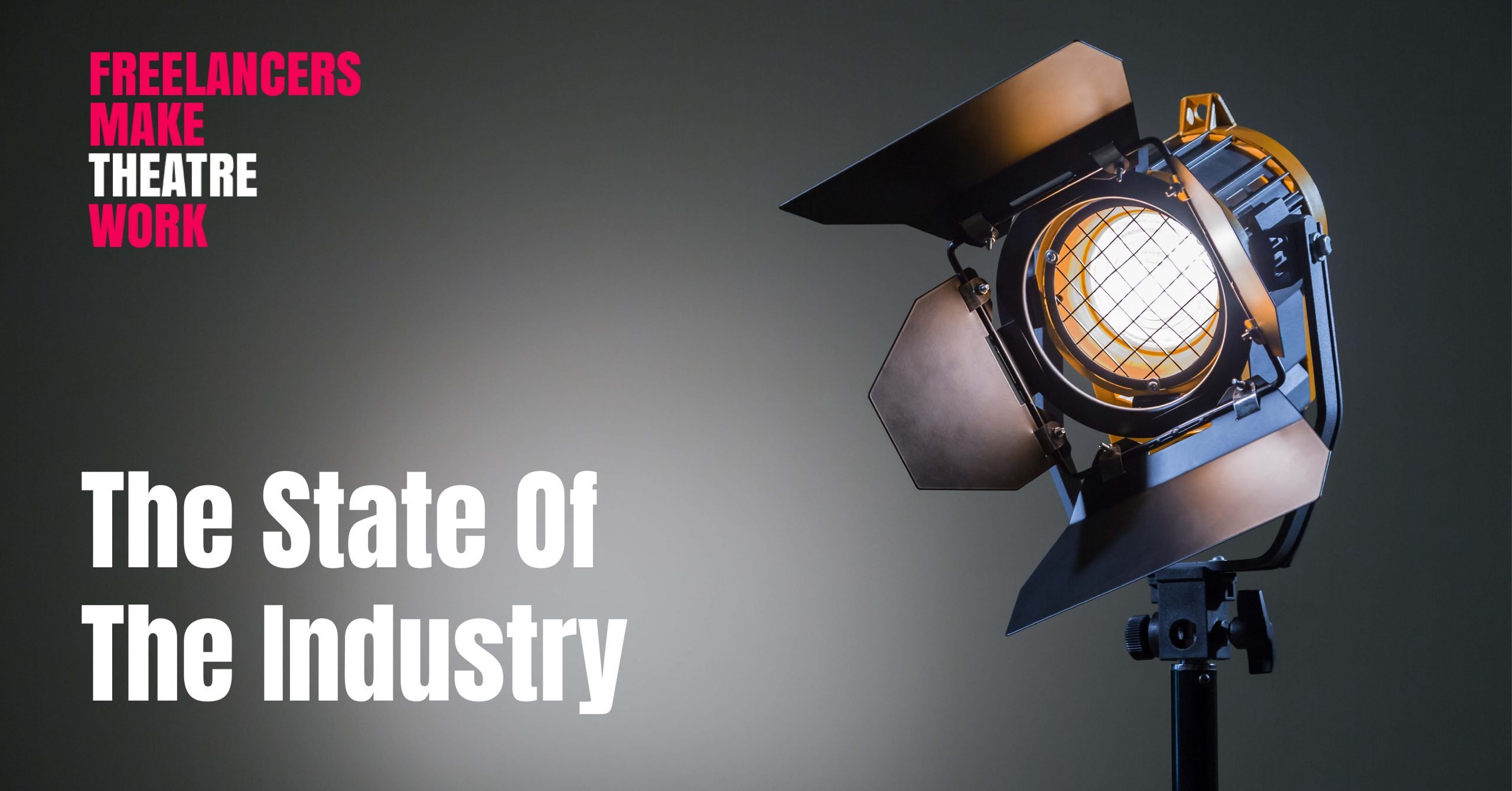 Mental Health and Wellbeing
It feels fair to say that the overall wellbeing of the sector is poor, with many people feeling acutely aware of the cumulative impacts and stress felt since the beginning of the pandemic.

The first signs of industry change led by long-covid are starting to become visible, for example with Kate Wasserberg taking leave from Stockroom to focus on recovery.  We send our thoughts to everyone trying to stay well right now.

There are a range of resources and support events popping up which you can find on our Wellbeing Page.

Freelance Income Support
The results of the FMTW Omicron Impact Survey for freelancers in England showed significant numbers of people have been impacted by cancellations, without any support net.  It also suggested that the cumulative impact of COVID on the sector is creating added work for those who manage to secure it.

Public Campaign for the Arts have done an amazing job at compiling the different devolved nations responses to Omicron, including financial support for freelancers where it is available.

Check it out here.

Lobbying
The next Cross Party Group for Culture (Scotland) will meet on Wednesday 19th January chaired by Sarah Boyack MSP.  This first meeting of the group will focus on how culture has supported communities throughout Covid-19 and is a space where freelancers can ask questions or offer opinions that will be heard by ministers.

Freelancers Make Theatre Work ran a snapshot survey to gather data around the impact of the Omicron variant in England, designed in collaboration with officials at the Department for Digital, Culture, Media and Sport. In a post Christmas follow up, DCMS officials have confirmed that the information generously shared by freelancers at this time has been passed up to the highest level and is being used to shape policy and decision making.

People to Thank
Almost two years into the pandemic, campaigning and activism are starting to change.  Some groups are understandably reducing their activity and it feels essential to give them a shout out.  In no way is this reward enough for the (often voluntary) work they have undertaken.

Hats off to The Freelance Network (who announced they would be reducing activity in December) and to The Dance Freelance Task Force who, in their recent article for Arts Professional announced that they will wind up in Spring 2022.

Union Activity
Equity are currently encouraging members to lobby for the following:

Long Term Systemic Change
SOLT/UK Theatre are working behind the scenes to explore how to implement their 10 Principles, which includes conversation with Freelancers Make Theatre Work  We hope this shows an eagerness to keep freelance voices at the centre of industry change.

Creative UK (who were the Creative Industries Federation) convened a meeting after Christmas to discuss the effects of the Omicron outbreak on the live performance sector.  Unusual, and heartening, was the presence of at least 10 freelancers in a room of producers and Chief execs. While conversation started off being around business models and audience confidence we managed to ensure the plea for the workforce was heard loud and clear with many admitting that their producing model was broken due to a lack of skilled people returning to the industry. From this conversation Creative UK are developing a policy around how freelancers might be paid and supported in the future with a serious look at models from other industries and countries so that alternative models might be offered to Government in the near future.  Watch this space as that conversation develops.

In Scotland, the Federation of Scottish Theatre’s started some in depth strategy work last year working through a series of targeted working groups.  The outcomes of this work are still being developed.

Restriction Changes
The recent alteration to isolation periods in England (from 7 days to 5 with two negative rapid tests)  has been welcomed by some theatre producers stating that they believe it will relieve some of the pressure on the deleted workforce.  Some freelancers have voiced concerns around this action. In today’s PMQs, it was also announced that the English government’s “Plan B” measures will end next Thursday. Mask-wearing, though no longer mandatory, will now be encouraged for any crowded and indoor settings (including theatres) with many theatres actively stressing the need for audiences to wear masks.

Audience Confidence
This month some producers have cancelled or closed shows early citing low audience confidence as having an impact on ticket sales.  Recent research conducted by Purple Seven and Morris Hargreaves McIntyre (MHM) released today shows that the majority of theatre audiences are not confident that life will return to ‘normal’ with no Covid restrictions in 2022.

Brexit
As something that is in itself super complex,  Freelancers Make Theatre Work has an area of the website specifically dedicated to Brexit updates, including a draft letter to your MP.

Signs of Hope
From inside Freelancers Make Theatre Work, we are witnessing more opportunities to be in spaces trying to drive change and there is a sense that the much needed joined up thinking called for at the start of the pandemic is starting to play out – even if slowly in some places.

With data having been cited as a limiting factor in driving equitable change for freelancers, Freelancers Make Theatre Work are really excited to announce that we will be repeating our Big Freelancer Survey, in the hope of developing it into an anual survey so that data will never again be barrier to improve our working conditions and in the hope that as the future unfolds, we will all be invited to do less surveys!!!

Across the water in the Republic of Ireland, a Basic Income Scheme for Artists has been announced by the Irish government.  It’s reported that around 2,000 artists will receive weekly payments to help support their careers.  We hope this gives change makers in the UK and Northern Ireland scope to consider similar initiatives.