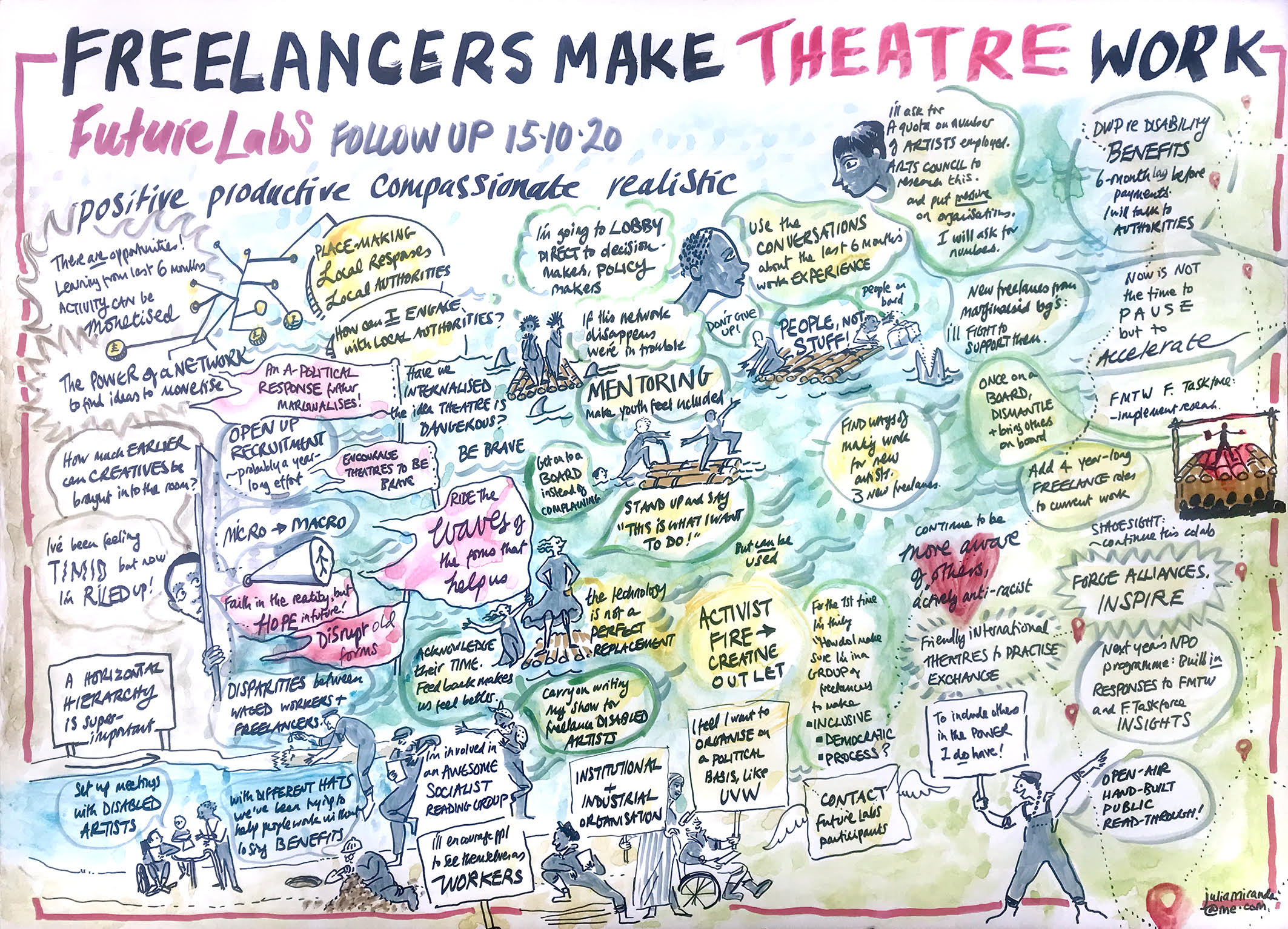 Large, uppercase, purple, pink and black letters across the top of the page read, Freelancers Make Theatre Work Future Labs Follow Up 15-10-20. Underneath, lowercase letters read positive, productive, compassionate, realistic. The image is filled with handwritten words. In between there are many human figures, all outlined in black and coloured in with blue. At the very right edge of the image, underneath the words there is the start of a map. It is green with red flags similar to Google Maps indicating destinations.

Moving from top to bottom, left to right. A bubble under the word positive reads, there are opportunities, learning from the last six months, activity can be monetized; the power of a network to find ideas to monetise. Beside an image of a person peeking around the door, a bubble reads, how much earlier can creatives be brought into the room? A second bubble reads, I’ve been feeling timid but now I’m riled up.Underneath, a sign reads, a horizontal hierarchy is super important. Directly below there is an image of three people around a table. One uses a wheelchair, another has propped their cane on the table. The word bubble beside them reads, set up meetings with disabled artist

At the top, beside the word productive, a bubble reads, placemaking local responses, local authorities. How can I engage with local authorities? In a flag, an a-political response further marginalizes. In another flag, encourage theatres to be brave. An arrow point from the word micro to macro above a spotlight illuminating a stick figure. Below that is a flag reading, faith in the reality but hope in future. In another flag, disrupt old forms. Above workers mending a road, disparities between waged workers and freelancers. A worker digging says, with different hats we’ve been trying to help people work without losing benefits.

At the top, under the word compassionate, I’m going to lobby direct to decision makers, policy makers. Two people on a raft surrounded by sharks say, If this network disappears we’re in trouble and have we internalized the idea theatre is dangerous. Be brave. Another two people on a raft, one holds a flag that reads, ride the waves of the paths that help us. Acknowledge their time, feedback makes us feel better. A person reading a pamphlet says, I’m involved in an awesome socialist reading group. A sign planted at the base of the image reads, I’ll encourage people to see themselves as workers.

At the top, under the word realistic, a person says, use the conversations about the last six months work experience. Two more people in the shark infested waters say, don’t give up; people not stuff; people on board. At another raft people help each other onto it. Around them bubbles say: mentoring makes youth feel included; get on to a board instead of complaining; and, stand up and say this is what I want to do. In the wave, the technology is not a perfect replacement …but it can be used. An arrow move points from activist fire to creative outlet. In a bubble, carry on writing my show for freelance disabled artists. At the bottom two people hold protest signs. One uses a wheelchair. Their sign reads, I feel I want to organize on a political basis like UVW. The other person stands and their sign reads, Institutional + Industrial organization.

At the top, under the word theatre a head says, I’ll ask for a quote on numbers of artists employed. Arts council to research this and put pressure on organizations. I will ask for numbers. In a bubble, new freelancers from marginalized groups, I’ll fight to support them. Beside a shark, once on a board, dismantle and bring others on board. In a circle, find ways of making work for new artists, three new freelancers. Written onto a heart, continue to the more aware of others, actively anti-racist. In a bubble, for the first time I’m thinking “How do I make sure I’m in a group of freelancers to make inclusive, democratic process”. A letter with wings reads, contact future labs participants. A person holds a sign and points happily. Their sign reads, to include other in the power I do have and says, open-air, hand-built public read-through

Under the word work, DWP re disability benefits, 6-month lag before payments, I will talk to authorities.

In an arrow pointed off the page, now is not the time to pause, but to accelerate. FMTW F Taskforce, independent research. Add four year long freelance roles to current work is written beside a person standing on stage in front of people. Stagesight, continue this collaboration

In a star, forge alliances, inspire. On top of a map, next year’s NPO program, build in responses to FMTW and F taskforce insights.