This week FMTW were in conversation with the Arts Council, the Cultural Industries Federation, SOLT and UK Theatres and a working group from the Chief Execs of the major theatres.  A summary of these meetings is below:

This was a first meeting with the CIF

The CIF are suggesting a Freelance Commission – CIF could convene – but would have to be cross art form (ie the whole creative industries).

FMTW– spoke about being on boards.  About how the relationship is only successful if it is fully supported – by Chief Execs, Ads and Chairs.

ACE – talked about their interest in boards.  How engagement with freelancers at board level can make companies and institutions more dynamic. Referenced Artistic Directors of the Future, Young Trustees movement. Also the similarities with the Digital Culture Network and Tech Champions.

Group acknowledged that freelancers aren’t involved in governance – how can we change that?

ACE filled us in with what funding is available at the moment.  It is clear the CRF is not going to be able to be spent by ACE.  This money is in the hands of treasury and is unlikely to be used for anything new.

ACE explained that project grants are available – and they are trying to encourage the engagement of freelancers – but to apply for a large grant it would need to have wider reaching nationwide public impact.

FMTW had raised the question of NPOs and accountability –

FMTW pointed out the lack of data around freelancers  put them in a tricky position.

ACE – expressed that it is hard data to collect– added that in existing NPO reporting, ACE already has info on the numbers of freelancers vs employees, asked if the financial implications of this could be added to NPO reporting, conditions of the CRF £250k+ grants (being revised right now), or even just asked of NPOs by ACE on a voluntary basis.  Can NPO’s publish how much they spend on freelances? Quite a discussion- ACE feeling is Yes, possibly, but if we’re talking about making it a condition of, for example, NPO funding,  we probably need to signal that up front and give clear and consistent reporting frameworks and let people know at what level it will be published.  So it can’t be NPO requirement til new funding agreements in 2023, too late for CRF grants but will go back and ask internally at ACE what can be done.

We discussed what research is there on who’s leaving the workforce?  Acknowledged this is very hard to define as people who have left, have left….

Discussed whether Arts Council could have an external reference group of freelances for consultation on policy, programmes etc? ACE are asking that question

There is a lack of space to join up NPO’s, freelances and funding bodies. Why is that space not being convened? Who should take the lead? – again lots of discussion and I don’t think we arrived at an answer. Also a question on Where might resources be found to create that space?

A meeting between three members of the FMTW volunteer group and three executive directors (who make up a working group working on behalf of the larger EDs group from the theatre and opera sector) to explore ways organisations can integrate freelancers more effectively, and better acknowledge the key importance of the workforce.
In the aftershock of this pandemic, how do we together create a more durable and sustainable working contract? How do we collaborate to bring about a mutual trust in best interest.
A question was raised: “ How do we de-risk the profession?”… is it possible whilst retaining the essential and creative fluidity which is one of the benefits to the actual work?
Could there be a dual approach: (a) operational: this would include financial terms and benefits – maternity pay? Sick pay?; how to do this without losing tax status? How to make sure there is non-exclusionary support in the case of future crises? (b) strategic: this would be more open access for freelancers to have a voice in the structures – the question of access to, or membership of boards, for example, or specific role-descriptions for associates. Both of these strands would embed ‘care’ for the freelancers into the relationship.
One organisation present is proposing an Advisory Board of freelancers (and others) with the power to report to the Board. We talked about working together to define terms of reference for this idea (and others) so that it can be tested across a consortium of theatres/organisations. Including mentored support for those freelancers involved? FMTW described the FutureLabs model of freelancers being paid when in dialogue with PAYE members of organisations as an aspect of equal dialogue.
The need to work together – both amongst the network of organisations and alongside freelancers was recognised.
A working group was suggested.

We talked about approaching some key trusts and foundations to see if they might fund a pilot project.

This was also follow-up meeting with ACE who have funded the research we have been doing in the FutureLabs – what are the significant and actionable changes which can be made by organisations to benefit freelancers in the near and longer future?

We started by describing the Future Labs.  What we have learnt.  The positives of a shared space.  The limitations: particularly what prevents these findings being put into practice. We acknowledged the quality of the conversation – but one of the issues is going back to a company and effecting change.  The conversations are separate at that stage.

We talked about how stretched the buildings and companies are – no money in the budget for freelancer support or activity. It was also remarked that larger companies receiving loans can no longer be mission driven, as they have to now be focussed on repayment. Mission-focussed work will need to be separately funded from now.

ACE acknowledged that it’s hard to support freelancers within current frameworks and funding levels.  Although there is money remaining in the CRF, it is in the hands of HM Treasury, not ACE. At ACE, all the emergency response funds are spent.  What is left in ACE’s gift is DYCP and project grants.  This round of DYCP applications had 3500 applicants – whereas there are usually around 500. So although the annual budget has increased from £4m to £18m, it’s still going to be challenging.  Longer-term, ACE are looking at how NPOs and freelancers work together.  Defining how they’d like this relationship to be in the future and possibly making it a requirement for funding. The RSC gave an example of their offer which is to develop a close working relationship with trusted colleagues via a freelance working group of production freelancers and freelance education practitioners.

ACE raised the idea of a wider consortium.  (The museums sector freelance workforce is looking to do something similar. ). The aim would be to look at long-term thinking to support and integrate freelancers, and reduce precarity.

We discussed how we could potentially use the evidence we’re gathering from Future Labs and the Big Freelance Study to make a larger grant application to ACE to look at longer term thinking.

We agreed to meet again. 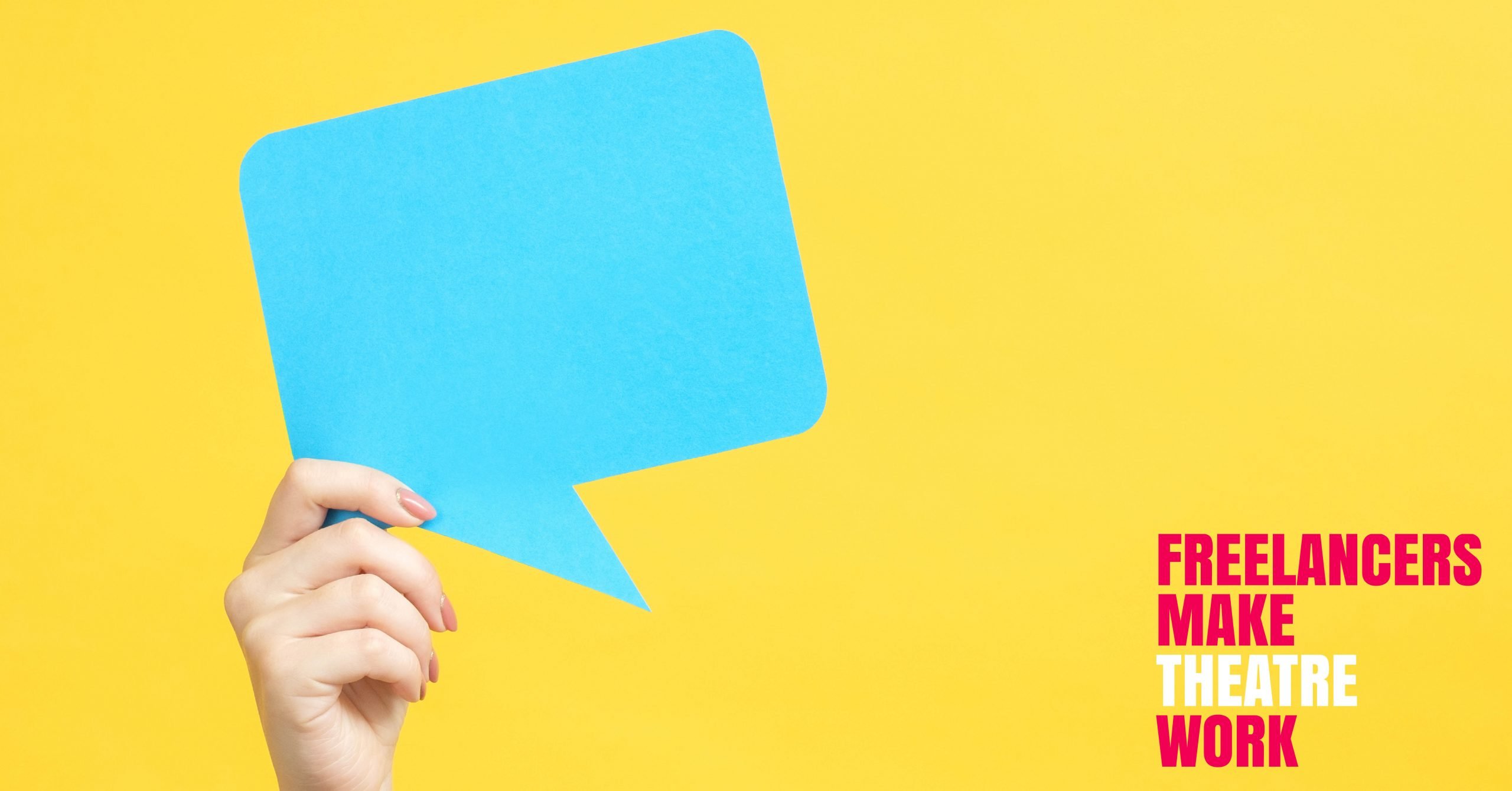